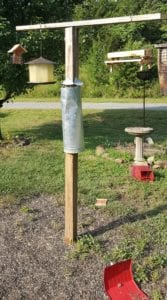 I knew I should have brought the birdfeeders in last night.

I got home just before 1 AM. My new job is going well, but the commute is an hour and seven minutes. Since I closed last night, I didn’t leave the building until well after 11:30 PM.

When I pulled into the driveway, I saw the birdfeeders were still out.

The night before was the same thing. I got home after midnight and saw the feeders had not been brought in. I know that our bear makes a circle around his territory and that he usually comes by every third day. Some I knew I was pushing my luck two nights ago. And last night, it should have been a no brainer to know I must bring in the feeders. But I went into the house and left them all hanging.

When I closed the front door, it was as if I had rung the dinner bell for the bear.

An hour later, the bear was at the feeders. He took the bottom off the suet feeder and ate the two suet cakes. Then he yanked the red barn bird feeder off its hook and settled down for a snack. At one point in the video, you can see him chasing off two skunks that had stopped by to see what was for dinner.

A little later, something scares the bear and he runs off.

I am sure that is why all the feeders did not get trashed. And last night, he didn’t get over to the front porch and drink the hummingbird nectar. I have tooth marks in two hummingbird feeders where the bear grabbed a hold of it with his teeth and then drank the nectar just like a bottle of soda.

Although replacing the bird feeders is not cheap, I want to thank the bear for coming.

When I opened the front door this morning to sit on the porch and have my coffee, the first thing I saw was the destruction of the bear visit. Immediately my mind raced to my WRAP plan. I saw the signs that something wasn’t right. I knew I was tempting fate by not bringing in the feeders. And yet I left them out two nights in a row.

I understand why relapse is the #1 concern of people dealing with depression and addictive behaviors.

I knew what to do and didn’t do it. I knew I must bring in the feeders or the bear would eventually tear them up. And getting away with it two nights ago, gave me the attitude that I could get away with it again last night. And as I go to the video of the bear, I can clearly see that I was wrong.

So, sign me up for having learned a life lesson about living with depression.

This is why I have a written Wellness Recovery Action Plan. This is why I have different support groups and have shared my plan with others. Not bringing in the feeders was a preventable trigger. I must remember that and not fall into the ‘it won’t happen this time, not to me” trap. This unhelpful thinking is what depression is counting on to get me back in its control.

I won’t should on myself but will go and clean up the mess.

And I will stay on top of this so neither the bear nor depression gets me.

Your comments, likes, and shares are appreciated as I continue my journey.

1 thought on “The bear came back last night”