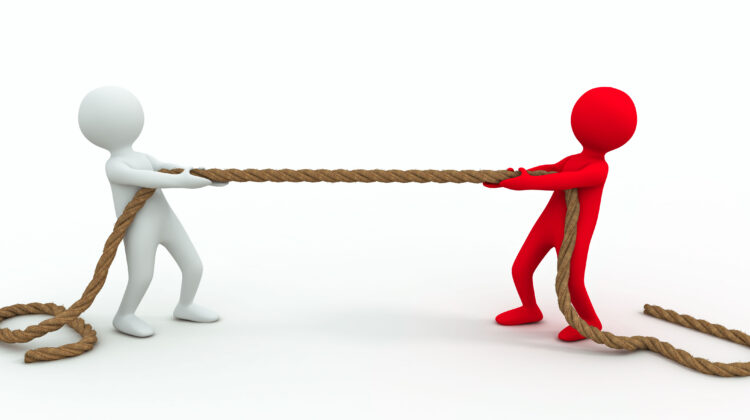 Some days, there is no fairy tale ending.

I wish it weren’t so. But depression and I are locked in a tug of war. Sometimes I can pull harder. And often depression pulls the hardest. Depression and I have been engaged in this tug of war for over 40 years. You would think I would understand the way it works by now.

And the more tools I collect to deal with depression, the more I am examining it.

I thought that this would be a good thing. By learning these new tools, I can see the dynamics between me and my depression. Unhelpful thinking styles come to mind. I am guilty of reverting to “all or nothing thinking.” This leads me to the “you always … or I never, ever …” thinking which ultimately can push me up against the wall.

This leads me to think that right now I am using unhelpful thinking, because I know I too win at times.

But I end up minimizing those occasions when depression begins to tug harder. I can pull out many examples of when depression was stronger, and in those moments, the times I was stronger are no where to be seen. And what I do remember becomes blurred in “oh that was just luck, the real you isn’t that good, that well liked, that smart.”

Depression loves to taunt me.

It loves giving me a little slack, so that for a few moments, I feel like I am in charge. Then as soon as I begin to embrace that decision, depression swoops in and dashes that idea. “What were you thinking?” “Don’t you realize that I am in charge?” “You are mine and can never win our tug of war game.”

There are those who express different ideas about their depression.

Some, like I was for 40+ years, are in denial. Some are at odds with it, some constantly battle depression, others recognize they have it, but that it does not have them. Those who accept it are finding a way to live with it, or at least that’s how it seems to me. And those who fight it, want it to go away.

For some, I believe that happens. Situational depression as in the loss of a spouse, child, a parent, can spiral someone into a depressive state. Or I think that is what happens based on my reading. Coming to terms with the loss, the depression lifts. But I am not sure that this is the same as a major depressive disorder.

Hiding from depression for over 40 years, I became the master of deception.

And I could (and can) convince myself that each round of depression is “just one of those things.” And once the depression begins to lift, I am better served by just forgetting about it. As it abates and stops tugging so hard, I want to distance myself from it. I sweep whatever is left under the rung and walk away as if depression and I have never met.

Then I am surprised when depression begins to pull harder again.

I act like this has never happened before. Then I think:

But I am not as strong as depression.

And with each test, each round of tug of war, I have been drawn even further into the abyss. I have traveled so far into the abyss, that circling the drain seems mundane. Knowing I have not reached the bottom makes going back into the abyss frightening.

I try not to think about what mental and emotional state I was in, as I cowered in the abyss.

Depression was tugging so hard, and I had all but let go of the rope. It was no longer an evenly matched contest. Our tug of war became a one-sided slaughter. And it was not depression that was getting whipped.

Thoughts of suicide find me when I am in the abyss.

Is it that depression is winning?

Or do I just need to explore my life when depression is sleeping? Right this minute, I do not feel that depression is tugging ridiculously hard. In fact, depression may be tiring. This could be my chance to pull it into the mud. I could be declared the winner and walk away from depression.

But my depression is not something I can walk away from.

Right now, today, I can make decisions about my future. I am not looking over my shoulder to see where depression is. There is no time spent understanding why depression is not pulling harder. If I did investigate it, perhaps it is because I put in the time to learn all about my depression.

Or my relationship with depression could be better because I am taking 300 mg of Wellbutrin XL every morning between 7 and 8 AM.

21 months after my diagnosis, my medication finally seems to be in balance. I am so thankful for that. The fact that my new psychiatrist was able to think outside the box and brainstorm with me all my options, led to this breakthrough. So now I must face whatever other issues depression has brought out for me to examine.

Depression is still tugging on the rope, wanting me to tug back. There is just enough tension, that I cannot completely let my guard down. It seems to me that depression is baiting me. Depression is almost daring me to stop paying attention to it.

Historically, it is at those moments where my life is near perfect, that depression begins to tug on the rope.

At first, it is not even noticeable. But the groundwork is being laid for an all-out authoritative yank on the rope. This has happened time and again in my life. And up until 21 months ago, I would try to ignore it. I would tug back and dig in until the match was a stalemate.

Then I would declare victory, even though that’s not what it was, and I would walk away.

There was no post-game analysis. No late-night recap of the event. All I wanted was to forget it. I wanted to sweep all evidence under the rug and never, ever think of it again. The word I am avoiding is DENIAL. If I acknowledged my depression, then I would feel obliged to face it. So, for over 43 years, I did not face it.

Each time the tug of war match ended, or took a break, I moved on.

Finally, I decided that ignoring depression was only emboldening it. I have written at length about the three choices I felt I had on the morning I walked into the emergency room. 1. Take my life. 2. Keep doing the same thing and keep expecting a different result. 3. Ask for professional medical help.

As I have said, choice three was the least frightening.

So, I showered and shaved, and I put on clean underwear. And I went to the hospital. Depression has been really upset with me ever since that day. It pulled out all the stops and yanked on the rope, in an all-out effort to finally win our tug of war game. But I was stronger. Or, with the help of my professional team, I became stronger.

Now here I am, still trying to figure out my life with depression.

I have done a tremendous amount of work, read, talked, taken medication, and even took SMART Recovery courses to know more about depression. And I now have a Wellness Recovery Action Plan that spells out what I look like when I am well, when I am beginning to regress, and when I am in crisis.

I suppose the good news is that I have NOT been in crisis for over 21 months.

In fact, I have been nowhere near crisis. Now I admit that I have regressed, and not every day is a positive day. But I know what the abyss looks like and my life today looks nothing like it.

So, my answer as to why depression sometimes wins is that beating me is depression’s job.

Throwing up roadblocks is its way of saying it cares about me. And by planting the seeds of my next disaster, it gets me to think that the destructive path I head down is all my idea. And it guides me, gently pulling on the rope until I am in the depths of despair.

And then, it is off on vacation while I am left to sort out the mess and find some way to move on.

Today, depression is still around me. But it is not winning the tug of war. It hardly seems that it is even playing. But I know that depression is not gone. I know I will be dealing with it the rest of my life. And I expect to live another 25+ years, so I need to figure this out.

For now, I take solace in the fact that I have depression, depression does not have me.