You are here: Home / Featured Home / I Did Not Kill A Painted Turtle Today – A Joyful Part II 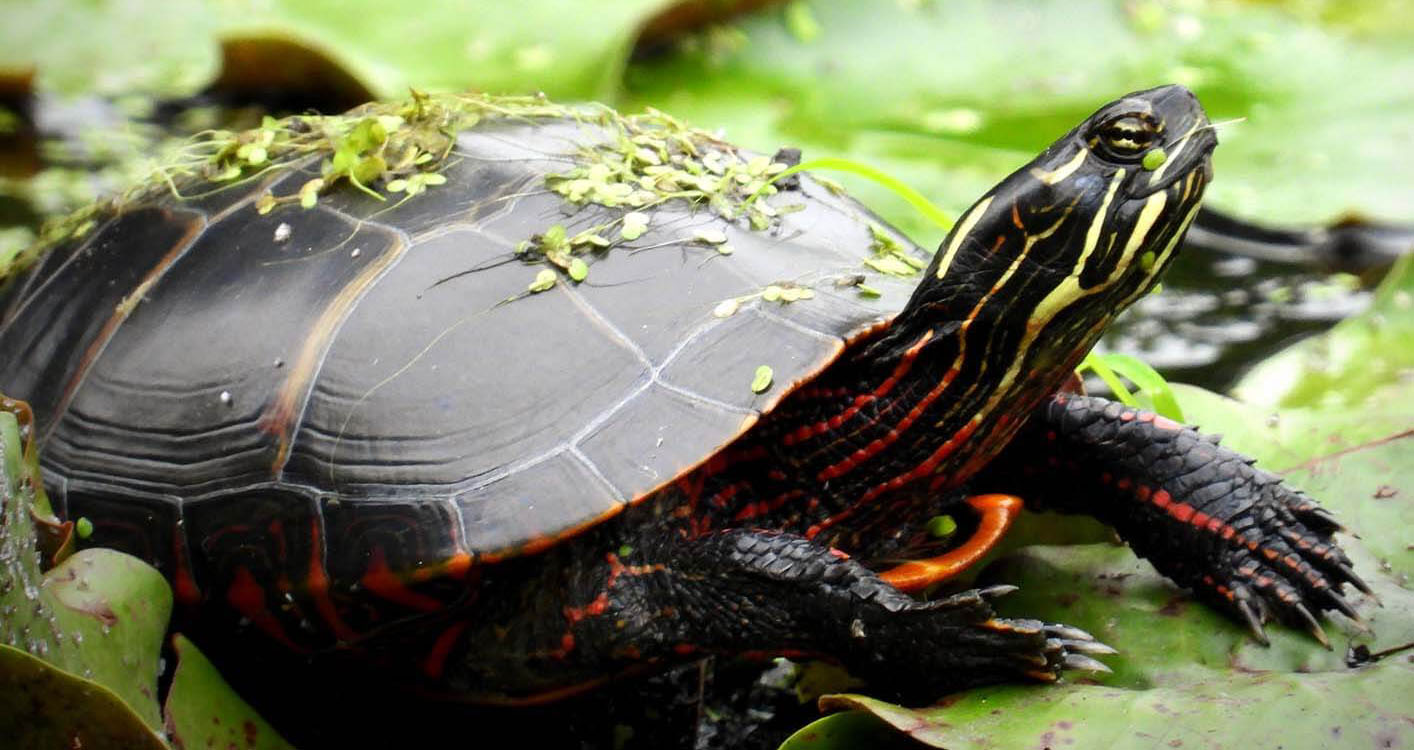 As we were walking our dog recently, the subject of painted turtles came up.

We talked about when they would be coming out of the water to lay their eggs in the lower part of our property. I have a small bag full of the leathery shells I have collected that the baby turtles leave behind when they break free of their land based underground nest and head for the lake. In the past three years, I have seen multiple turtles laying their eggs.

Sadly, last year, I ran over a turtle while mowing the “lower forty.”

READ: I Killed A Painted Turtle

It was not laying eggs, but most likely was going to as it was facing uphill. The grass had gotten thick, and I did not see the turtle until it was too late. Being out of the hospital for less than a month, I had not yet learned a lot about living in the moment. I blamed my depression, but really, I just was not paying attention.

Plus, up until that moment, I had only seen a handful of turtles out if the water.

That has all changed now. Today, I was headed down to the glade on the riding mower. I was making the first pass around the edge. I was careful not to mow the ends of the raspberry bushes that are poking their arms out into the open area beyond the forest cover. As I swung back towards the tree line, I saw it.

It’s back end was in the dirt and the front of her shell was tilted slightly upward.

The dirt was wet around the area she was depositing her eggs. I had stopped the riding mower just inches from her nose. With the mower deck raised and the blades off, I tried to back up, but the hill was still damp from yesterday’s rain and I could not get any traction in reverse.

Not wanting to roll forward, I put the parking brake on and shut off the engine.

Wishing I had my phone to take a picture of the turtle and the tractor, I headed up the hill to the house. I was also thinking I was going to need some help pushing the mower up the hill and away from the turtle. My wife put different shoes on, I grabbed my phone and we headed back down the hill.

It never dawned on me that the turtle would be gone when we got back.

A thorough inspection of the underside of the mower deck did not reveal a turtle. It appears that as soon as I headed up the hill, she abandoned her efforts and left the area. In the ten minutes it took to return, she was nowhere to be seen.

Being a water turtle, I imagine she had headed back down the hill, through the glade, and into the lake.

Bur if she still had eggs to deposit, I don’t know how that works. As I looked closer after rolling the tractor slowly down the hill, without the engine running, I saw a second deposit. She must have laid those first and the mower deck was covering it when I saw her in the dirt.

I am so grateful that I did not kill a painted turtle this year.

It still hurts me to think I did that. After all, these turtles can live to be the size of a baseball home plate. I have seen Gargantuan crossing the dam. She is colossal.  The turtle I hit last year will never get to be that big.

So today ended up being surprisingly good.

I got the yard mowed, the potted annuals on the front porch watered and fed. And I picked up a few more stakes and strung my 28” chicken wire around the vegetable garden. This fence has kept the rabbits out, but not the squirrels or the deer. And if a black bear wants to eat from my garden, the odds are greatly in its favor.

Perhaps next year, I will build a seven-foot fence around the vegetable garden and my fruit orchard.

But for now, I will be happy if the rabbits cannot eat my lettuce or the cantaloupe vines. So far, rabbits have not been able to get beyond the chicken wire. The evening ended with a cookout, baked sweet potatoes, and fresh corn on the cob. Oh, did I mention the ice cream sandwiches for dessert?

Not killing a painted turtle today makes me incredibly happy.

Having talked about turtles laying their eggs, and anticipating them being somewhere on the property, I had a plan in place. And because I had thought about it, not running over the turtle was possible.